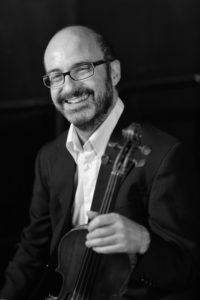 Angel Andrea Tavani graduated in violin at the Arrigo Boito Conservatory of Parma in 1989. at the same time he following classical studies.
He attended the Orchestral Qualification Course at the Fiesole music school, where he also attended the Chamber Music courses and the high specialization course for trio held by the Trio of Trieste.
He also studied the repertoire of duo and trio with piano for three years with Maestro Pier Narciso Masi at the Accademia Musicale in Florence.
He followed courses in violin technique and interpretation with S.Lupu, A. Stern, A. Bologni, C. Rossi.

He has been part of numerous chamber ensembles, including: Soloists of the Bellini theater in Catania, Accademia Strumentale Toscana, Solisti Fiorentini.
He collaborated with many orchestras throughout Italy (RAI of Rome, opera of Rome, musical afternoons of Milan, Bellini Theater of Catania, Orchestra of Tuscany, Lyric Theater of Cagliari, Spoleto Festival Orchestra, La Fenice Theater of Venice, and many others) often playing principal roles.

In 2000 he won the competition for the first violin section of the Maggio Musicale Fiorentino Orchestra, (principal conductor z.mehta), with whom he made numerous national and international recordings and tours (China, Russia, Japan, America, India etc. ).
He is a founding member of the “Cameristi del Maggio Musicale Fiorentino” orchestra with which he performs, as a soloist and first part, concerts all over the world and recordings.
In addition to the concert activity he did the teaching activity, founding in 2011 the prestigious Suzuki music center in Florence.

In 2009 together with Lorenzo fuoco and elena marazzita he founded the association AidaStudio, which works as an agency for artistic promotion, services to artists, design and distribution of shows collaborating with the main management and representation agencies of artists in the musical context and in the theater sector and cinema, for the programming of festivals, musical and theatrical reviews with the best actors of the Italian theater and cinema scene, concert programs and shows able to satisfy any request and requirement.