Günter Neuhold was born in Graz, Austria, in 1947. In 1969 he completed his studies at the Graz Conservatoire with a masters degree. He then followed advanced courses in Rome with Franco Ferrara and in Vienna with Prof. Hans Swarowsky. Between 1972 and 1980 he was engaged at various German opera houses, a period he closed as first Kapellmeister in Hannover and Dortmund.

After winning several competitions (Florence 1st prize 1976; San Remo „Marinuzzi“ 1st prize 1976; Vienna „Swarowsky“ 2nd prize 1977; Salzburg „Böhm“ 1st prize, 1977 Milan, „Cantelli“ 3rd prize 1977), he began an international career. From 1981 to 1986 he was Music Director at the Teatro Regio di Parma, where he devoted most of his time to Verdi operas and Chief Conductor of the Orchestra Sinfonica „Arturo Toscanini“. From 1986 to 1990 he was Chief Conductor and Musical Director of the Koninklijk Filharmonisch Orkest van Vlaanderen in Antwerp, which achieved an international reputation during this period and toured in Germany, Italy, Great Britain and France. Günter Neuhold was General Music Director at the Badisches Staatstheater Karlsruhe from 1989 to 1995. In Karlsruhe he performed a Richard-Strauss-Zyklus and the „Ring des Nibelungen“. From 1995 to 2002 he was General Music Director and Artistic Director at the Theater der Freien Hansestadt Bremen. From 2008 to 2014 he was Chief Conductor and Music Director of the Orquesta Sinfonica de Bilbao. 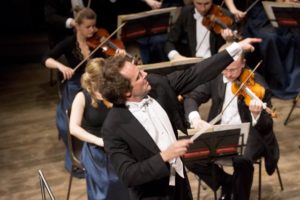